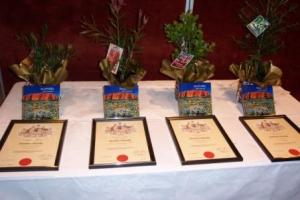 Not taken at my ceremony. If only I’d lived in Glenelg Shire, I’d have got a plant.

In the four years while I waited to qualify for Australian citizenship, I’d occasionally imagine what my ceremony would be like. I’d read about them – jolly events where the latest batch of immigrants celebrated their newly-earned Aussieness amongst family and friends. I’d heard tales of sausage sizzles and gifts of trees, of handshakes from Mayors and enthusiastic flag-waving.

And even although I told everyone I was really only upgrading my permanent residency to citizenship so that I could vote and choose the appropriate passport for the shortest queue at the airport, I was still a little bit excited about taking the pledge.

The day finally came. Our ceremony was to take place in what we considered (after a quick Google search) to be a reasonably swish venue in the CBD. We turned up half an hour early, as instructed, and joined the small crowd of migrants outside the venue. Like most there we’d made an effort – the Silver Fox in a suit and me in a smart frock.

After waiting in the cold for 25 minutes, we were invited inside. I was surprised to be handed my certificate at the registration desk. Wasn’t the Mayor supposed to present it to me? But there was no Mayor there. Our MC was to be a young civil servant (we assume – he only introduced himself by his first name) in an open-necked shirt and sweater. Not a mayoral chain in sight.

We took the pledge en masse, standing at our seats. Those including the words ‘under God’ in theirs went first, followed by me, the Silver Fox and the rest of the atheists. It was like a strange kind of Moonie wedding without the white frocks.

The final stage was to sing the national anthem. You don’t have to learn the words to pass the citizenship test, so clearly no-one had. Fortunately the Department of Immigration and Border Protection had anticipated this, and put the words karaoke-style on a video of smiling Australians taking part in wholesome pursuits. Unfortunately, the words appeared at the bottom of the screen, meaning that anyone seated behind the first couple of rows couldn’t see them. We all sang what words we could see between the heads in front, but the effect was rather like an internet radio station playing out of tune music and buffering every few seconds, as they did in the days before broadband.

Never mind, I thought. At least we have the morning tea to look forward to. We’d been told to allow two hours for the ceremony, and the official bit had only taken 20 minutes. Alas, morning tea turned out to be a hot water urn with some coffee sachets, paper cups and a jar of plain biscuits that looked suspiciously like an afterthought. We gave up and headed back to work.

I hadn’t expected a three-course meal. I didn’t expect a sausage sizzle on a chilly June morning. And I can live without a native plant for my garden. But I had expected something, well, more special.

From any angle becoming a citizen of another country is a big deal. Yes, for me, it was largely an administrative procedure – an important one, but not significantly life-changing. But there would have been others in the room for whom it meant much more.

Perhaps the certificate and the rights attached to it should be enough. But given that you have to go through the ceremony, and having been told repeatedly how important it is, I can’t help thinking we were short-changed. It was a missed opportunity for the government too. A citizen who feels valued is a citizen who cares for their country. A lamington – or even a Tim Tam – with our cuppa afterwards would have gone a long way.

One thought on “Welcome to Australia?”